Story of the Chief Civilian Human Resource of the Philippine Army 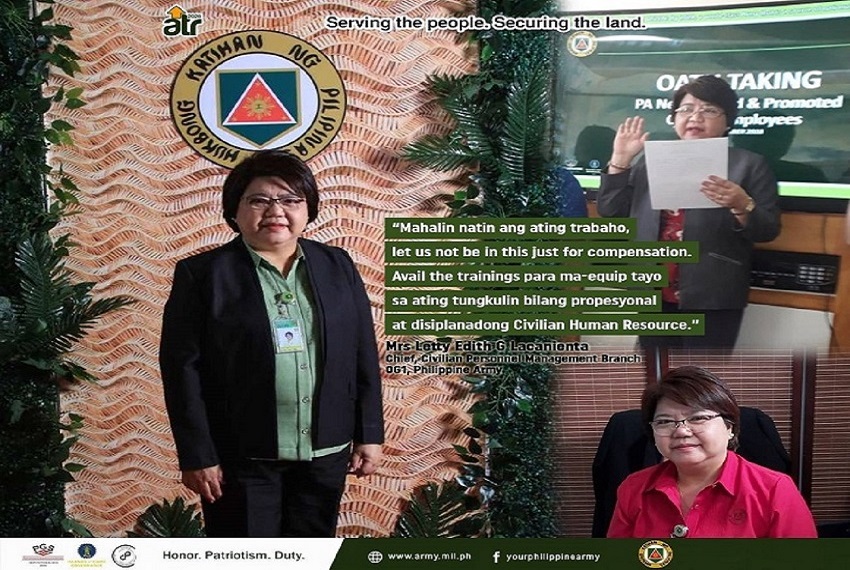 In her 38 years as a Civilian Human Resource, Mrs. Letty Edith G. Lacanienta believed that no small act of service is deemed insignificant.

When she was in 2nd year of college at Jose Rizal College in 1978, Mrs. Lacanienta took the Civil Service Examination Sub-Professional Level with the encouragement of her father. She passed the examination and in 1981, she took another exam for the Professional Level and succeeded with flying colors.

Mrs. Lacanienta recalled not having any idea whether the examinations will serve a purpose as she graduated with a Bachelor of Commercial Science Major in Accounting. Unbeknownst to her, these examinations became her stepping stone to her career as a public servant.

As institutional memory of the Philippine Army, the Civilian Human Resources stay a long time in the organization serving the people alongside the officers and enlisted personnel. They witnessed and learned a lot as they climbed through the ranks. This is what happened to Mrs. Lacanienta when she entered the organization as part of the Army Support Command (ASCOM).

From her humble beginnings at ASCOM, she continued her service at the Army Adjutant where she persevered to widen her horizon and improve the quality of her service. She worked in the field of statistics and then became a Clerk Typist when she was appointed as a contractual worker at the Headquarters Philippine Army in 1984. Her efforts were met with recognition and commendations, and her excellent work ethics equipped her when she became the secretary of the Promotion Board Bravo in 1985.

Mrs. Lacanienta considers this job as one of the most exciting jobs of her career for this is the first time she has traveled to different provinces and field units to fulfill her duty. She did her job diligently and never stopped learning for ways to improve her skills until she transferred to the newly established Civilian Personnel Office (CPO) in 1990. Upon learning what her job at her new office entails, she took trainings and schooling to elevate her knowledge as she took on new tasks and responsibilities.

She became the CPO’s chief in 2014 before it was dissolved and taken to the Office of the Assistant Chief of Staff for Personnel. Mrs. Lacanienta climbed through the ranks and held various positions while she was there. Her perseverance rewarded her with experience and knowledge to lead the civilian personnel within the organization.

With the years she spent in the service, Mrs. Lacanienta saw the development and implementation of programs for the benefit of the Army’s civilian employees. She carries what she learned as she takes on the responsibility as the Chief Civilian Human Resource of the Philippine Army.

Taking on this responsibility was not easy for her. She faced many challenges as she faced different people and personalities, but this did not hinder her from doing her best every day. Mrs. Lacanienta noted that handling people is hard, but she finds happiness in her work, and the challenges she faces only inspire her to do her job better.

Mrs. Lacanienta remained optimistic and patient for opportunities to grow and boost the morale of the Army’s civilian personnel. This value is what she would also like the present and future human resource to remember and instill as they work for the people. She also reminds the personnel to love their job and equip themselves to contribute to a better Philippine Army.